For many years, manned aircraft pilots have relied upon NOTAMs (Notice to Airmen) to let everyone affected know that there is a change in the airspace that couldn’t have been made known well in advance.  With the advent of drones, it was felt necessary to use the NOTAM process to inform those using the National Airspace System (NAS) of their presence in certain situations.  This seemed to work for a while but then many became concerned that the system for NOTAMs could quickly become overwhelmed with drone related filings.

To reduce this potential complexity, most airspace planning apps, such as Skyvector or iFlightPlanner offer “layers” to turn on and off certain features. These features might include Temporary Flight Restrictions (TFRs), Text Weather (METAR/TAF), and DROTAMs. With the recent increase in UAS missions, primarily utility inspections, a flight planning map may look overwhelming with blue worm like figures drawn all over certain areas. These “blue worms” are DROTAMs. With a click of a check-box on the layers map, one may easily make those worm figures disappear. The DROTAMs are often separated into less than or greater than 200 feet above ground level (AGL). Most manned aircraft pilots cruising along with a minimum requirement of 500 feet AGL , for the most part, couldn’t care less about drones flying well below them.

When doing inspection work for utility companies, the client will often request all UAS operations to include the filing of a DROTAM. This is often under the direction of the utility company’s own Aviation Unit, typically consisting of both fixed and rotary wing manned aircraft. A large enough utility company has someone managing all flights during inspections, manned and unmanned. The manned aircraft crews are usually very interested in monitoring DROTAMs while inspecting power lines at treetop heights to avoid any contact with UA.

There is a tremendous amount of history with the FAA’s flight service. Many older pilots cherish the days of visiting a flight service center to receive briefings before flights. At one point in the early 1960s, the FAA operated 297 flight service stations. In November 1982, the first Automated Flight Service Stations (AFSS) began operation in Denver, CO. By 1995, the AFSS’s were consolidated into 61 stations, and 31 Auxiliary Stations, primarily in Alaska. Lockheed Martin was contracted to operate flight services until August 15, 2016. At that point, Leidos took over the flight service process. When you dial into 1800WXBRIEF, you will get Leidos Flight Service to assist your flight planning needs.

There are essentially two ways to file a DROTAM. Due to the heavy volume of filings, an online process was created. If there is a Certificate of Authorization filed (often by the Drone Vendor or the Client), one may file online. This is actually called a UAS Operating Area (UOA). A DROTAM may be filed in addition to the larger boundary of the UOA. If you are flying a UAS mission with no UOA or COA, you must call in the request on the telephone. This is when you actually get to speak to a “briefer” at Leidos Flight Service. After filing over 400 DROTAMs in Northern California, I was trained by the staff at Leidos to make efficient calls with clear information. You may file one DROTAM or several in one phone call. Calling in a DROTAM with the right briefer may help you learn the language and format to file one electronically.

Preparing information before the call is a must. You can call in knowing a latitude and longitude only, and the briefer will walk you through it. I highly recommend preparing the NOTAM as much as possible before calling. For demonstration purposes, I will go through filing a point to point NOTAM for a river, pretending you are working an event on a river. (inspecting a pipeline or filming a triathlon that runs along the river). I have chosen a stretch along the Susquehanna River in Pennsylvania.

1.  Pick a starting point and get the LAT/LON of that point. If inspecting for a utility company, they will most likely have overlays or data on each asset, complete with LAT/LON of each structure. 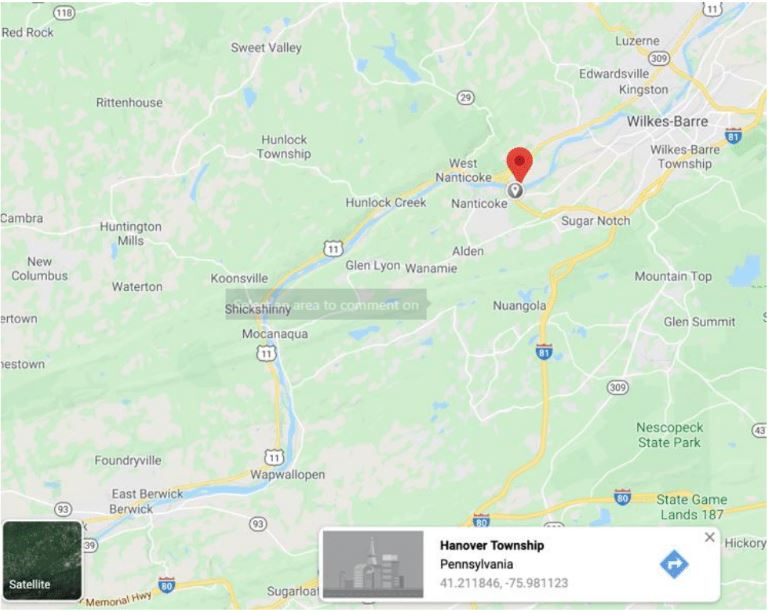 2.  Find the closest VOR (NAVAID) to your point. Using a flight planning software, actually plan a flight from the VOR to the LAT/LON. This is to get the Radial and DME from the VOR. To do this on iFlightPlanner.com (free), go to the site, type in the tool bar any airport, select its identification (3 letters), space, then copy paste LAT/LON from Google Maps or whatever you are using. Replace the comma between the LAT and LON with a back slash. This plots out a path from the airport to your point of interest (POI). 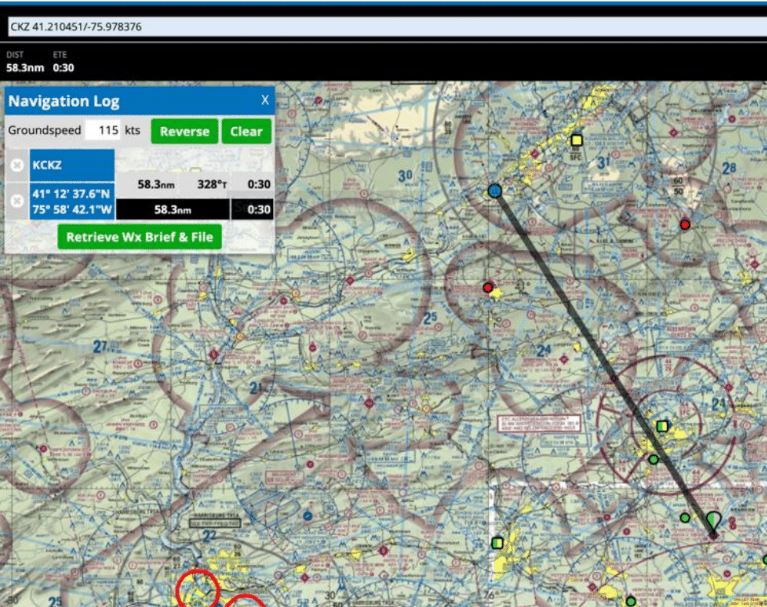 3.  From this map, find a VOR nearest your POI. Look for the compass rose, you know, the thing you had to learn when preparing for your 107 certificate. Look for the blue square near the VOR. The closest one to my POI is Wilkes-Barre LVZ. Now type into the toolbar LVZ to replace the original airport if needed, hit enter. Now to take the radial info from the map. The first point is located 13.6 nautical miles from LVZ along the 265° radial. Note that the box gives you the 254° radial, which is True NORTH! Do NOT use this. You need Magnetic North! You get this by finding the radial off of the compass rose. Note the arrows counting every 30o and the blue ticks are every 5 degrees. You will need to estimate at times, I recommend rounding to the nearest degree.Write down the first point:

LVZ 265° 013.6 nm (this is read Lima Victor Zulu two six five degrees zero one three decimal 6 nautical miles) This description has great meaning to a full-scale pilot, while the LAT/LON is virtually useless

4.  Select the next point, go as far as you are able to go without the subject (river or line) falling out of the 1-mile wide path of the NOTAM. The 1-mile width is actually 0.5 miles on either side of the line from the point chosen.After dropping the new LAT/LON into the toolbar, keeping the same VOR, you get your new radial. LVZ 268° 015.5 nm.

5.  The last point chosen for this example is shown below. The LAT/LON was copied and pasted into the toolbar next to the LVZ lettering of the VOR. This last point is recorded as LVZ 262o 021.8 nm. You may notice that other VOR’s are nearby. When you can’t visually decide if another VOR is closer than our current choice of LVZ, you can simply replace LVZ with a new VOR, in this case, Milton MIP. Milton is 24.7 nm from our last point of interest.Since LVZ is closer, we stick with LVZ. 6.  One detail that is often added to a NOTAM is “plain language.” In addition to the radial information and DME from the VOR (NAVAID), the POI is described relative to a local airport. Looking back at our first POI, the closest (non-private) airport is Wilkes-Barre, WBW. This is recorded as 7.7 Nautical Miles Southwest WBW. Each point may be additionally described by this plain language 7.  The final preparation of the NOTAM before calling is shown below. The more correctly you format your NOTAM, the faster the briefer will be able to record and process your request. You will dial 1-877-487-6867. You will be asked by a recording, “What state are you filing your NOTAM?” Type in the corresponding numbers for the state of interest. For Pennsylvania, PA, type in 7 2. Here is an example of the NOTAM to be read:

You will be asked for your initials, mine would be “Juliet Whiskey,” phone number, and company name. Below is a screen shot off of Skyvector.com showing the NOTAM filed: If you click on the NOTAM, it will show details about the NOTAM. Always double check to see that the NOTAM did go through and was filed correctly. The briefer is supposed to contact you if there is a problem filing in any way.The reference points may be either a VOR (NAVAID) or an airport. If the entire UAS activity takes place inside of the 5 mile radius of an airport, the NOTAM is based off of the airport, rather than a local VOR. If the entire UAS activity takes place within 25 miles of any VOR, the NOTAM is based off of VOR. If the any of the UAS activity is located greater than 25 miles from VOR, the NOTAM is referenced to the “Center.” You can see all of the Centers across the US on the sectional.

During my months and months of filing NOTAMs every night, I was assisted by many amazing briefers. They will get to know you and your initials and you will get to know which briefers are efficient by their initials as well. Some may joke about accidentally hanging up on the slow briefers and call back until you get that ringer of a briefer on the other end of the line. Leidos is actually celebrating their 50th anniversary as a company originating in 1969.